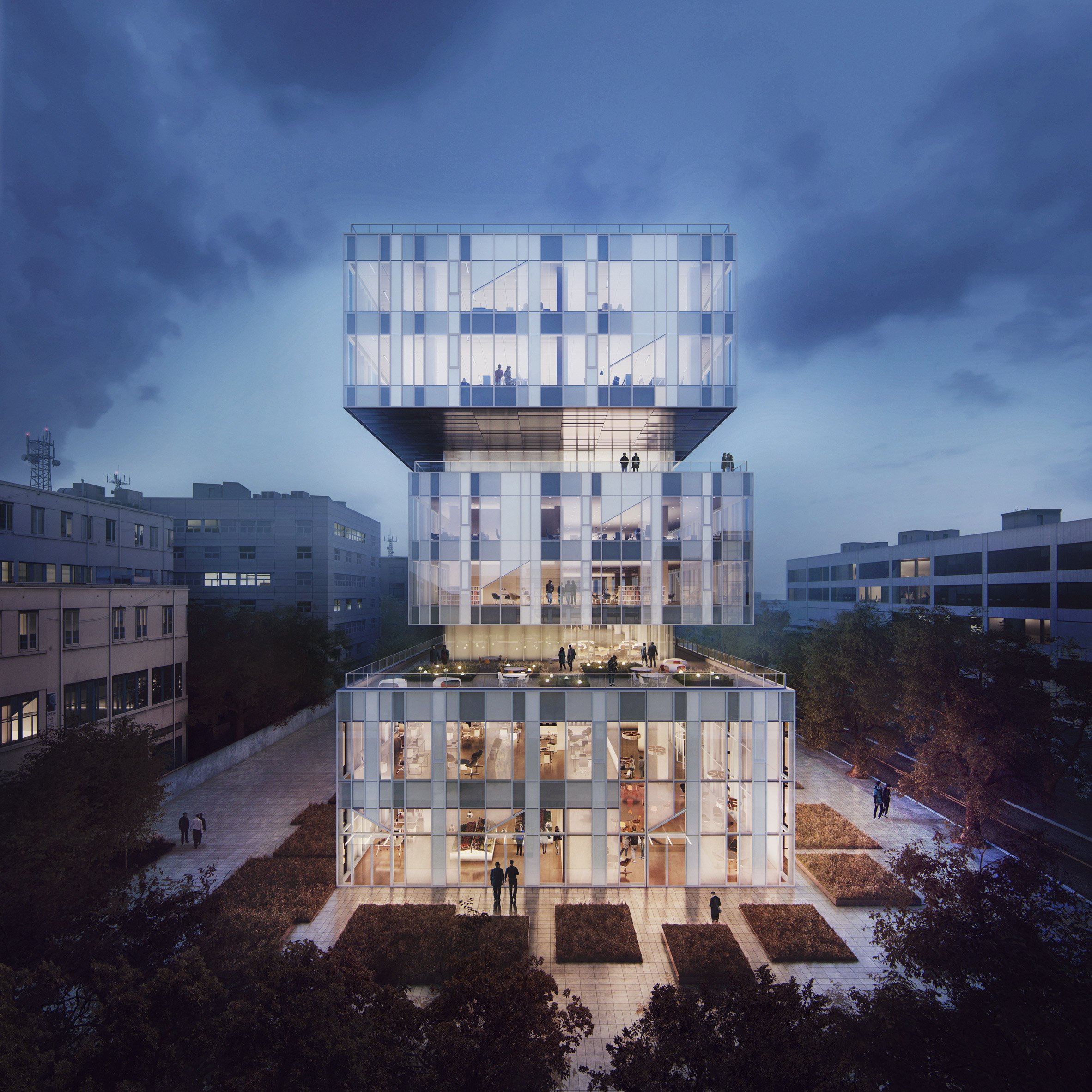 The project is the third collaboration between Schmidt Hammer Lassen and the government-backed CaoHeJing Hi-Tech Park.

CaoHeJing Hi-Tech Park is a state level national economic and technological development zone in east downtown Shanghai. Covering an area of 1,450 hectares, it is home to 1,200 domestic and overseas technology companies.

Sitting on the edge of the park, the Creative Headquarters will act as a platform for innovation and an accelerator for new technology in China, supporting technology firms and connecting local and overseas graduates and enterprises.

The project is formed of three overlapping volumes split by landscaped terraces. The two upper volumes will be dedicated to a divisible incubator studio space, with the ground floors occupied by the main lobby, a coffee bar, and an exhibition space. The external terraces will play host to meeting rooms and support services.

“The volumes are playfully staggered to create a combination of exposed and shaded external spaces that can be utilised at different times of the year in Shanghai’s variable weather conditions”, explained Chris Hardie, a partner at Schmidt Hammer Lassen.

“By doing this we create a direct connection to exterior green space for the buildings occupants to use throughout the year.”

Shanghai is on China’s east coast and has a humid subtropical climate with four distinct seasons. In winter, cold winds rushing down from Siberia can bring sub-zero temperatures and even snow, and in summer temperatures can climb above 35 degrees Celsius, with high humidity, freak thunderstorms, and typhoons that sweep in from the Pacific.

In July of this year the city recorded its hottest day since records began, with temperatures of 40.9 degrees Celsius.

Whatever the weather, Schmidt Hammer Lassen believes that connection to the outdoors is conducive to a positive office environment.

“Part of the idea behind the evolution of the project were discussions we had with the client about what we thought and believed made a good workplace environment,” Hardie told Dezeen.

“For us, we have always focused on basics such as good natural daylight, the ability to create natural ventilation and a visual and physical connection to some exterior green space – all within a well-proportioned space with good materials.”

Narrow floorplates will allow maximum daylight to reach the interior, and windows will be openable for ventilation. The outdoor terraces will be fully useable during Shanghai’s pleasant autumn and spring.

“In the summer, the more shaded areas can be utilised where wind will pass between the terrace and the cantilever more, and in the winter the more open areas will disperse the wind and planting will create some shelter,” explained Hardie.

Shade from the cantilevers will also control solar gain and glare in the summer months, allowing for the full glazing on the shared floors.

Shanghai’s energy saving regulations stipulate that new buildings must have a 70 per cent glazing to a 30 per cent insulated panel ration. The Creative Headquarters goes beyond this, with a glass ratio of just 6o per cent.

The project is aiming for a Leadership in Energy and Environmental Design (LEED) Gold sustainability rating, and should save 30 per cent more energy than the LEED base model.

The project is due to be completed in 2020. The building will be the third design the Scandinavian firm has delivered for CaoHeJing.

In 2016, Schmidt Hammer Lassen transformed an old office building in the park into its innovation incubator, covering the old rendered concrete in a translucent aluminium skin. The project was part of a pilot scheme to overhaul the Park and reflect its technological ambitions and futuristic outlook.

The practice also designed the interiors for the CaoHeJing Innovation Hub, an office space for five technology firms from Silicon Valley in America to base their operations in China.

The Danish firm has offices in Copenhagen, Aarhus and Shanghai, and has worked on numerous other projects in China’s largest city.

In 2016, it won the contract to design a new city library, and completed a glass walled events space on the Huangpu River dubbed the Cloud Pavilion. And in 2013 it began work on the Green Valley project, a mixed use development of the former Shanghai 2010 World Expo site, due to be completed in 2018.