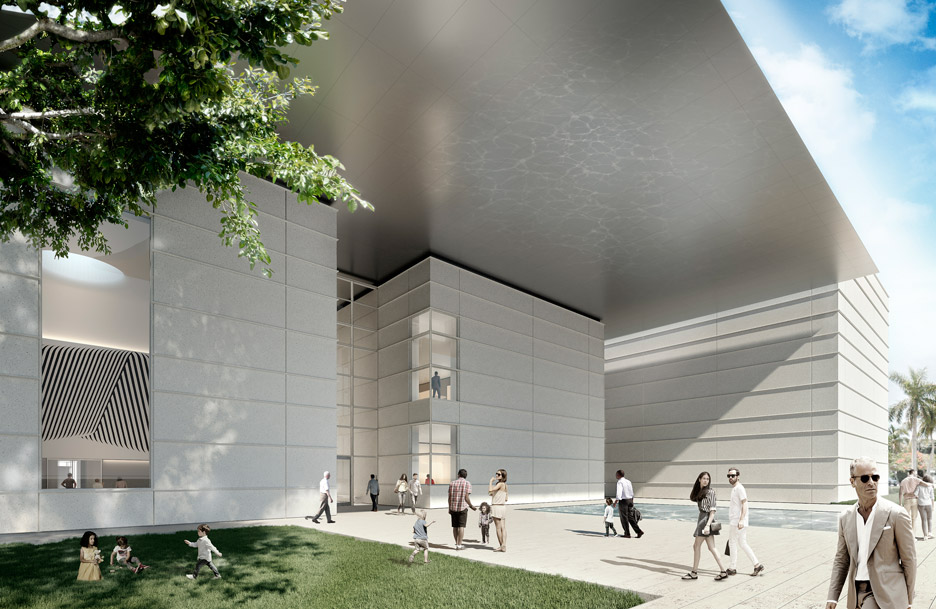 Construction work has begun on Foster + Partners new wing for the Norton Museum of Art in West Palm Beach, Florida, a project that was first announced in 2013 (+ slideshow).

The 59,000-square-foot (5,480 square metre) wing will create a new entrance for the museum under a monumental canopy with hidden supports that sits 43 feet (13 metres) above the ground.

The canopy provides shelter for visitors and shades the building from the harsh Florida sun.

The wing will include 12,000-square-feet (approximately 1,100 square metres) of new galleries – a 35 per cent increase for the museum.

It will also house an events hall and lounge with a massive window overlooking the grounds, as well as a 210-seat auditorium and a dining pavilion.

“The new extension of the museum represents an exciting opportunity to place the reinvigorated Norton at the heart of Florida’s cultural life and to establish its international presence, allowing more people to enjoy the museum’s very special collection,” said architect Norman Foster, founder of the British architecture firm.

The museum was originally built in 1941 by architect Marion Sims Wyeth as a series of Art Deco pavilions surrounding a courtyard.

A later expansion reorientated the entrance and destroyed the symmetry of the Wyeth plan, so the new wing has been designed to reinstate it.

The project also aims to reinforce the museum’s connection to its landscape. The entrance canopy has a scalloped cut-out to preserve an 80-year-old Banyan tree.

“Reinforcing its natural setting with a ‘museum in a garden,’ our aim has been to restore a sense of clarity to the existing building by reasserting the logic of the original plan,” said Foster.

The new event and visitor spaces are intended to “transform the museum into the social heart of the community,” he added.

Kathryn Gustafson of the landscape architecture firm Gustafson Guthrie Nichol has also designed a new 20,000-square-foot (1,858 square metre) lawn and garden for the museum on the site of a former parking lot.

South of the garden, the museum has purchased six historic houses. Two have been converted into the director’s residence. The remaining four will be used to house artists in residence.

The project is schedule to open to the public in 2018.

The Norton Museum of Art is known for its collections of 19th and 20th century European art and contemporary photography.

Palm Beach is home to some of the wealthiest people in the US. It’s neighbour, Miami, is currently enjoying a boom in landmark architecture projects – including Foster’s residential tower for the Faena Miami Beach development.

Other Foster + Partners projects in North America include a skinny residential tower and a new office building both in Midtown Manhattan and Canada’s tallest residential building in Toronto.