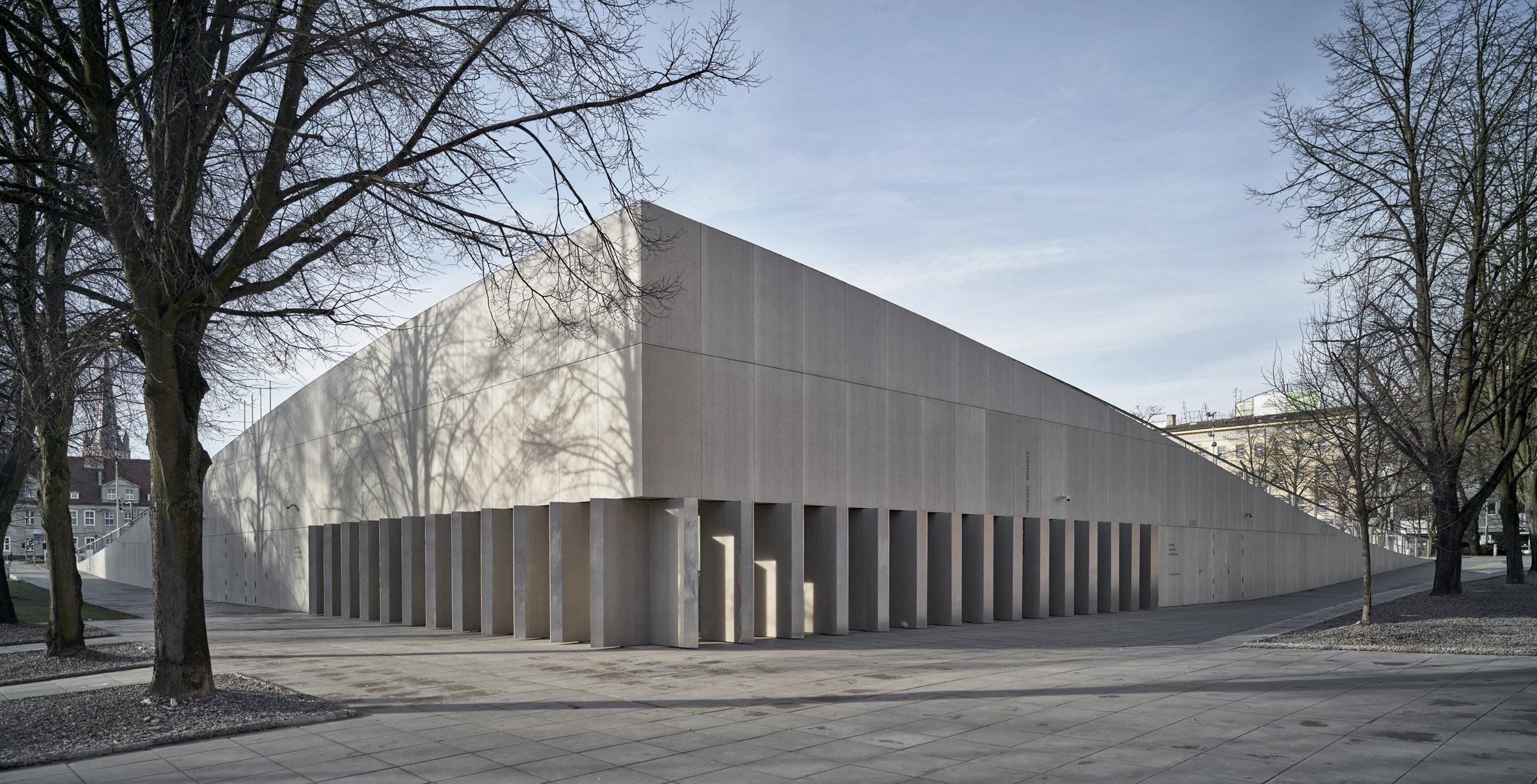 In this exclusive movie, Polish architect Robert Konieczny discusses the hybrid form of his National Museum in Szczecin, which was crowned World Building of the Year 2016 last month.

Completed by Konieczny’s firm KWK Promes earlier this year, the National Museum in Szczecin – Dialogue Centre Przełomy is a largely subterranean building, which features an open public space on its gently sloping roof.

The unusual structure references the history of the site in the centre of Szczecin, Poland.

It used to feature a series of townhouses, but these were destroyed by bombing during the second world war and the space remained an empty square after that.

“Our project attempts to combine two contradictory traditions of the space: the pre-war townhouse quarter and the post-war square,” says Konieczny in the movie, which was filmed at the World Architecture Festival 2016 in Berlin.

“As a result, an urban hybrid was created, which is a townhouse and a square at the same time,” he says.

Much of the building’s roof is at pavement level, but it gently raises at opposite corners to create space for the museum’s entrance at one end and a barrier to a busy road at the other.

National Museum in Szczecin named World Building of the Year 2016

Its sunken form ensures it doesn’t block views of significant buildings around the square, including the Szczecin Philharmonic Hall by Spanish studio Barozzi Veiga, which won the Mies van der Rohe Award in 2015.

“Our urban hybrid was formed so that in front of the philharmonic hall and an old church we stayed at pavement level,” Konieczny explains. “Where we could, the building gently elevates. As a result, an amphitheatre-like space was created.”

Visitors enter the museum from entrances in one of the raised corners of the building, which are concealed by a series of moveable concrete panels.

“We wanted the entire concept to be uniform, so we used only one material – concrete,” Konieczny explains. “The entrances hide behind pivotal wall partitions, which give the impression of a monolith when closed.”

Inside the museum, which documents the 20th-century history of Szczecin, the walls and ceilings are made from the same pre-cast concrete material. But the interiors for the underground exhibits are all painted black to contrast with the rest of the building.

“Everything is made of identical concrete panels, the same ones used for the elevations and pivotal wall partitions,” says Konieczny.

“But when you stand at the threshold to the underground part of the exhibition you see that you are at the border of two worlds.”

KWK Promes convinced Szczecin council to allow the building’s roof to be used for various activities that were previously prohibited in the square.

“Its topography encourages cycling, rollerblading or even sledging when it snows, because it is the only hill in town,” Konieczny says.

“Most astonishing is the fact that the city council understood that on this unusually shaped square they could hold concerts that are attended by thousands of people.”

Dezeen is media partners for World Architecture Festival 2016, which this year took place in Berlin in conjunction with Inside festival of interior design. We will be publishing more videos about the winning projects in the coming weeks.

Last year the World Building of the Year award went to Ole Scheeren for The Interlace, a series of apartment blocks stacked diagonally across one another to frame terraces and gardens.