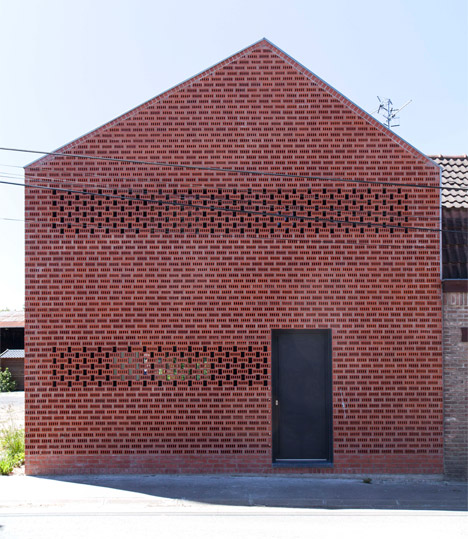 Half brick, half corrugated iron, this house in the northern French countryside by Yoda Architecture aims to meld together the local urban and agricultural typologies (+ slideshow).

Designed by Robin Lamarche and Julien Chabert – co-founders of local studio Yoda Architecture – Maison B provides a 100-square-metre home for a family in Herrin, a commune near Lille.

The house is positioned with one gable facing the street and one towards fields and barns, hiding its transition from brick to iron.

The front gable is affixed to a neighbouring house and is constructed in perforated red brick to match the existing streetscape, while its back pays homage to the region’s agricultural buildings and is clad in dark corrugated iron.

Like the corrugated metal extension Graal Architecture added to a nursery school near Paris, this choice of material is designed to distinguish parts of the building from its surroundings.

“The project proposes to join together the two regionalistic typologies of the villages of the north of France,” said Lamarche and Chabert.

The building’s asymmetric pitched roof is also covered in sheets of corrugated iron, which are slightly recessed from the cladding so as to go undetected from the street.

Both the floors of the two-storey house are segmented by its timber frame into four sections, each serving a different function.

At ground level these form a sitting room, hallway, kitchen and utility space, while upstairs the quadrants are filled by two bedrooms, a bathroom and an atrium overlooking the lounge.

Sections of bricks on the front facade are spaced apart, creating two long, narrow strips with a pattern of rectangular gaps that offer glimpses of the street while preserving privacy for residents.

While the front of the house appears to have minimal openings, its side and back walls feature large, unobstructed windows and glazed doors that open towards a garden and the adjacent fields.

Less than ten miles away in the city of Lille, architect Emmanuelle Weiss added a contrasting dark brick extension to a red brick house, helping to distinguish old parts of the structure from the new.

Photography is by Yoda Architecture.