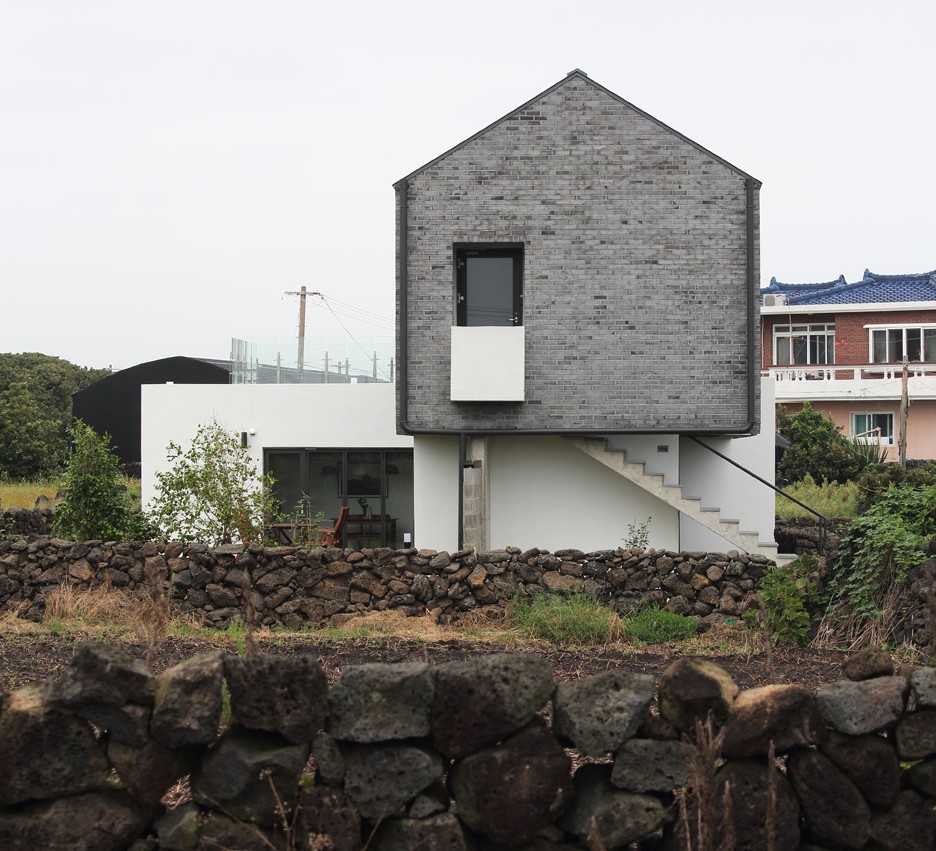 Containing living spaces in its L-shaped base and bedrooms in its gabled upper storey, the house is built from a combination of brick and local stone – popular construction materials on the South Korean island.

The building is set on a plot of ex-agricultural land near the village of Pyeongdae on the volcanic island’s northeastern coast, not far from another project by the Seoul architects – a whale-inspired makeover of a century-old farmhouse.

With future development in mind, Z Lab avoided side windows where possible in favour of panoramic glazing overlooking the sea. They named the project Pyeongdae Panorama after this element of the design.

“The lot was embracing a magnificent ocean view,” explained the architects. “Wishing the building and the land to reflect all the stunning views of the Pyeongdae Sea, we named the place Pyeongdae Panorama.”

Jeju island has seen a recent spike in construction, with holiday homes and artists’ studios by big-name architects springing up along the rugged coastline or in its pastoral landscape.

Like many of the island’s newcomers, Z Lab’s clients hail from South Korea’s mainland and have come to Jeju to set up in the tourism business. They envision moving to Jeju once they finally retire and wanted a home that could accommodate them in old age but in the meantime function as a pair of guest houses.

“They are a so-called half-retired generation who retired but refused to live a life of retirees,” explained the studio.

“They wanted to start a new life in Jeju, so they asked us to build a pension where guests can enjoy the privacy that single-family housing offers.”

“As a livelihood for the second start after retirement, Pyeongdae Panorama offers flexibility of connecting two separate guest rooms, and scalability so the place can be expanded to serve as a main home for the retirees some day when they decide to really retire.”

The residence is split into two guest suites, named Ocean Panorama and Garden Panorama in reference to the orientation of windows.

Each self-contained apartment is designed to sleep four guests, and is equipped with its own separate living, dining and sleeping spaces spread across the building’s two floors.

The Ocean Panorama suite has a high, wood-lined ceiling and panoramic windows in the living room, while the Garden Panorama room features a mezzanine level and a private terrace. The building also includes a small utility space to store cleaning equipment and for laundry.

Rooms throughout are finished in a combination of raw concrete and white plasterwork, and dressed with geometric-patterned textiles.

While the L-shaped plan gives the residents of each half of the house privacy, a door connects the suites to allow larger parties to occupy the whole property.

Stone walls and separate entrance gates help to further define boundaries between the two residences at ground level, but they share a barbecue pit and outdoor hot tub facing the sea.

While many of Jeju’s newer buildings have chosen to echo the island’s traditional volcanic stone and slate architecture or carry out sympathetic restorations of old farmhouses, others fall at the other end of the spectrum.

“They are making a positive impact to the village revitalising the local economy while making efforts to preserve the rural character of the community,” according to Z Lab.

Photography is by Kim Jae-kyeong.