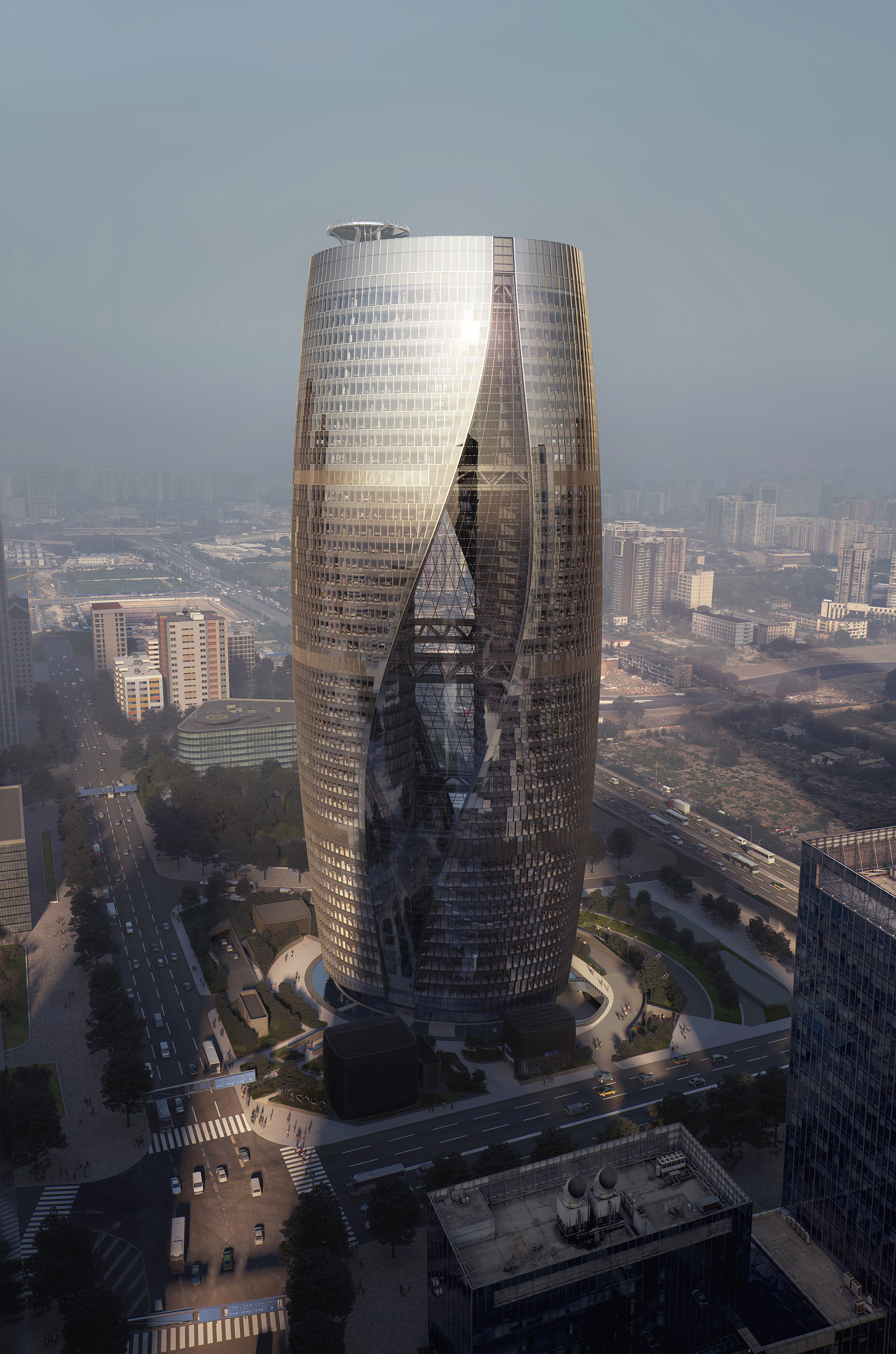 Construction is well underway on a 207-metre skyscraper by Zaha Hadid Architects in Beijing, which will feature a huge twisting atrium that is expected to be the world’s tallest.

Located in the Lize Financial Business District – a new business, residential and transport hub in southwest Beijing – the 46-storey Leeza Soho will feature a mix of offices and shops.

Designed by Zaha Hadid before her death last year, the skyscraper – which is already 20 storeys tall – is positioned above a pair of subway lines that diagonally divide the site.

The tower is split into two halves by the subway and connected by a huge central atrium. As it rises, the atrium twists at 45 degrees to orientate the higher floors with the east-west axis of Lize Road – one of west Beijing’s main streets.

Once completed, the 190-metre-high void is expected to be world’s highest – a title currently held by the Burj Khalifa skyscraper in Dubai.

The shape of the atrium creates convex openings that run up either side of the tower to allow for plenty of natural light and views of the city from the centre of each floor.

Walkways will bridge the cavity at different levels, while a glass facade will encase the two halves of the tower in a single cohesive envelope.

The glazing will be double insulated and as each glass each pane steps up it is angled to aid ventilation. The intention is to help maintain a comfortable indoor climate in Beijing’s weather conditions, which ranges from extremes of warmth and cold.

A public space connecting with the interchange below will occupy the atrium on the lowest level, leading on from the outdoor public plaza that surrounds the tower.

There will also be space to park 2,680 bicycles, with lockers and shower facilities also provided. Dedicated charging spaces for electric or hybrid cars are located below ground.

Construction of Leeza Soho is to reach its full height of 207 metres in September this year, with the tower’s completion slated for late 2018.

The tower is the latest of four projects that Zaha Hadid Architects has designed for the developer Soho China, including two others in Beijing.

The Galaxy Soho building is made up of four main domed structures, while the Wangjing Soho commercial complex features three pebble-shaped towers located midway between Beijing Capital Airport and the city.

“China attracts the best talent from around the world,” explained Soho China’s chief executive Zhang Xin. “It’s important to work with architects who understand what the next generation requires; connecting communities and traditions with new technologies and innovations to embrace the future.”

Leeza Soho is one of over 30 projects under development by ZHA at the time of its founder Zaha Hadid’s death earlier this year.

Hadid’s former partner Patrik Schumacher is now leading the studio, which has recently completed a new headquarters for Antwerp’s Port Authority and is putting the finishing touches to a pair of skyscrapers in Nanjing.