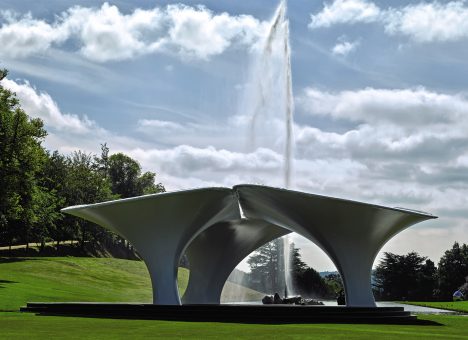 A pavilion designed by the late Zaha Hadid for London’s Serpentine Gallery has been installed in the grounds of a stately home England’s Peak District, ahead of its sale.

Zaha Hadid‘s Lilas pavilion is the focal point of this year’s Beyond Limits exhibition at Chatsworth House – an annual showcase of contemporary outdoor sculpture, organised by London auction house Sotheby’s.

The structure was originally designed as a temporary shelter for the Serpentine Gallery’s annual summer party in 2007, because the more ambitious pavilion by Olafur Eliasson and Snøhetta was behind schedule.

The group of toad-stool like structures features the white curves that are characteristic of Hadid’s designs. It rises 5.5 metres above the ground, and has smooth sides that echo the design of Hadid’s 2013 Serpentine Sackler Gallery.

This and the nine other sculptures included in the exhibition are all up for sale.

They have been installed in various locations around the picturesque gardens of Chatsworth House – a grand lakeside home in Derbyshire, which has also previously hosted an exhibition bringing together contemporary furniture and 19th-century sculpture.

“For each of our annual Beyond Limits shows we seek to bring something new and thrilling to the experience, and the resurrection of Zaha Hadid’s seminal Lilas pavilion in such a historic location is one of the highlights this year,” said Sotheby’s curator Simon Stock.

“The public display of the remarkable structure, which has travelled from a royal park to a stately garden, is also a fitting tribute to such a pioneer in her field,” he added.

A reflective stainless-steel pavilion by Spanish artist Cristina Iglesias is present in a stretch of meadow, a female nude by French sculptor Aristide Maillol stands at one end of the lake and a large-scale light installation shaped like waterlilies by British artist Bruce Munro floats on the water’s surface.

Zaha Hadid died aged 65 following a heart attack in March 2016. The Iraqi-born architect is one of the most successful female architects in history, and is the designer of buildings including the London Olympic Aquatic Centre and the MAXXI National Museum of XXI Century Arts.

Hadid was also the creator of the inaugural Serpentine Gallery Pavilion in 2000. Originally planned as a one-off structure, its success spawned an annual pavilion commission by the gallery that continues today.

This year the Serpentine Gallery Pavilion series was expanded to include four summer houses, which are now up for sale with the architecture-led estate agent The Modern House.