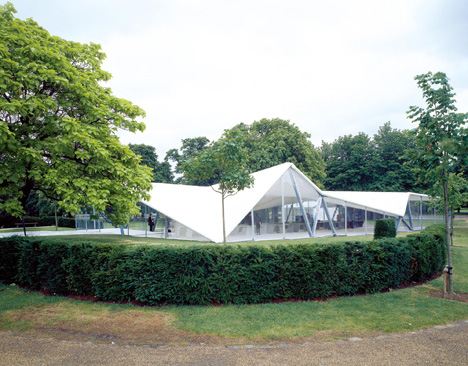 Movie: next up in our exclusive video series celebrating the 15th Serpentine Gallery Pavilion, gallery director Julia Peyton-Jones looks back at how Zaha Hadid‘s marquee from 2000 launched the annual commission.

The first Serpentine Gallery Pavilion was designed by Zaha Hadid in 2000, which the gallery commissioned as a one-off project to host a fundraising gala marking its 30th anniversary.

“We asked her to do it – which she did as an enormous favour as a gesture of friendship – because we wanted to do something completely different to anything we’d done before,” Peyton-Jones explains in the movie.

Initially, the structure was going to be taken down after just one night, but Peyton-Jones was able to convince former member of parliament Chris Smith, secretary of state for culture, media and sport at the time, to let the gallery keep it up for longer.

“What was incredible was that Chris Smith was at the gala and I was able to ask if we could keep this up for longer than a night,” she explains. “He said: ‘Absolutely’. He loved Zaha’s work and it stayed up for two months throughout the summer.”

“It was a structure of swooping forms,” Peyton-Jones says. “The inside of the pavilion went from black to white, so you had these tables laid out that spread throughout the whole of the interior.”

The Serpentine Gallery went on to commission a different architect to create a pavilion each year, offering them the chance to create their first built structure in England. Subsequent pavilion architects have included Peter Zumthor, Herzog & de Meuron and Sou Fujimoto.

In 2013, Hadid also designed a permanent extension housing a cafe and events space for the neighbouring Serpentine Sackler Gallery.

Peyton-Jones says the inaugural pavilion was instrumental to the success of the Serpentine Gallery’s future projects.

“It was very Zaha, but obviously in a very paired down way and I felt very proud of it,” she says. “It really set the bar for what was to follow, which was incredibly important.”

Dezeen will be looking back at each of the pavilions from 2000 to 2015 in subsequent movies over the following weeks. You can watch all the movies as we publish them on our YouTube playlist: