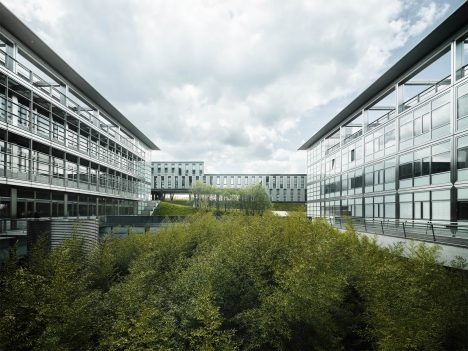 The Zurich-based studio – which was co-founded by architects Roman Züst, Michel Gübeli and Andrea Gambetti – won a competition to design the 8,500-square-metre building.

It provides extra offices and teaching space for the university’s Hönggerberg campus, which is located on the outskirts of Zurich.

The architects named the project An Adventure in the Horizontal after its elongated form, which comprises a series of blocks that steps 200 metres up a hillside beside the existing campus.

“With its elongated shape and stepped massing, the iconic HCP building marks the start of the science city campus for all who approach from downtown,” said the studio.

“In deference though not subordination to its architectural older brother, the adjacent HCI chemistry complex, the new arrival lies low and hugs the ground,” it added.

Each rectilinear block is clad in alternate strips of glazing and opaque grey cladding, which create a chequerboard pattern across the outer walls.

V-shaped pilotti support the building as it steps up the landscape, creating three sheltered terraces below the blocks.

“On the outside, the wraparound chequerboard facade accentuates the balanced volume’s sculptural qualities while ensuring flexibility of use with its modular, repeating open and closed elements,” said the studio.

Inside, there are 155 rooms containing study and seminar spaces, and a kitchen for the university’s Department of Materials Science.

While the brief was to provide a quick fix to the campus’ space shortage, the architects wanted to steer clear of the type of mass produced cabins or containers that might typically be used in these situations.

“All the client initially asked for was a temporary, off-the-shelf solution to an acute lack of space,” they said.

“But sometimes the least promising of circumstances can give rise to architecture that is truly compelling, from both a financial and a design perspective,” they added. “For its size, it is the most cost-effective structure ever built by the university.”

ETH Zurich has a number of campuses in and around the Swiss city.

Among other things, the university has a strong reputation for its design and technology programmes, with recent projects including a canopy built from 399 slabs of limestone and no glue, and a four-wheeled robot that can scale vertical surfaces.