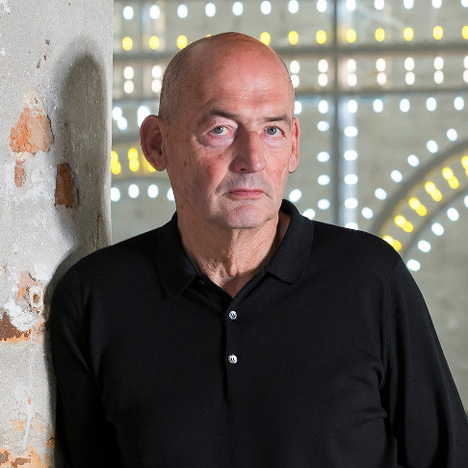 Architect Rem Koolhaas has spoken out against the way technology is infiltrating buildings, saying it is “totally astonishing” that people are willing to sacrifice their privacy for convenience and describing the rise of smart systems as “potentially sinister”.

Speaking to Dezeen in Milan, the OMA founder claimed that digital technologies represent the most radical shift in architectural practice for over a century – but that architects have become too distracted by the benefits and overlooked the dangers.

“The way we architects look at the digital is simplistic, because we see the digital simply as a domain that enables us a greater position and that ultimately – in the form of 3D printing for instance – may offer us a return to unfettered creativity,” he said.

“But in the meantime, a lot of businesses are actually looking at architecture as potential carrier of new technologies.”

The Dutch architect described the increasing popularity of domestic systems like the ones offered by Nest, which allow residents to control devices such as thermostats and smoke alarms using a smartphone, as “weird”.

Related story: Within ten years “everything will have data in it”, says Nest CEO

“It creates, in my feeling, unhealthy knowledge of your personal behaviour preferences”.

Koolhaas said he first became aware of the role digital technologies were having on architecture when OMA was researching for the Elements exhibition at the Venice Architecture Biennale 2014, where he was creative director.

The exhibition, which presented the history of architectural components like the staircase and the window, featured several modern domestic devices that function by tracking and recording the movements of a building’s occupants.

These included Nest, as well as a heating system that uses motion sensors to focus beams of infrared radiation on people as they move through a building.

Other smart-home systems on the market include a lock controlled with a smartphone app rather than a physical key, and a wireless doorbell that allows users to check who’s at their door remotely.

“Somehow we are almost perfectly happy to have no privacy anymore,” Koolhaas stated.

“Particularly for somebody of my generation, it is totally astonishing that in the 1970s we marched for privacy, and here we are surrendering our privacy almost with eagerness.”

The interview took place at the recent opening of the OMA-designed Fondazione Prada complex, which occupies a renovated century-old distillery in Largo Isarco, southern Milan.